Check out my art page on mashaksaunders.imagekind.com! Here you can buy prints of my paintings, framed prints or canvases! 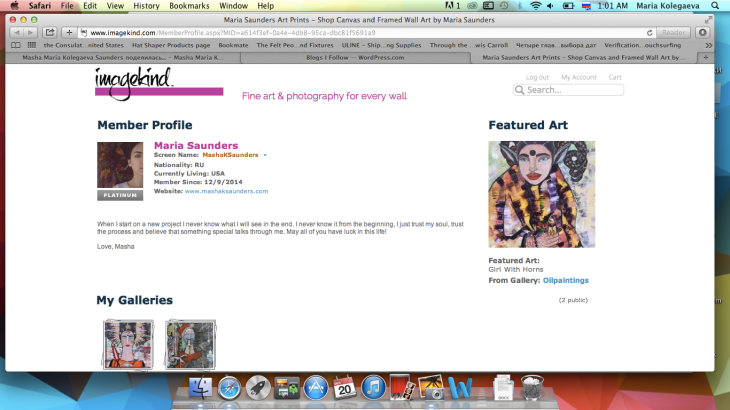 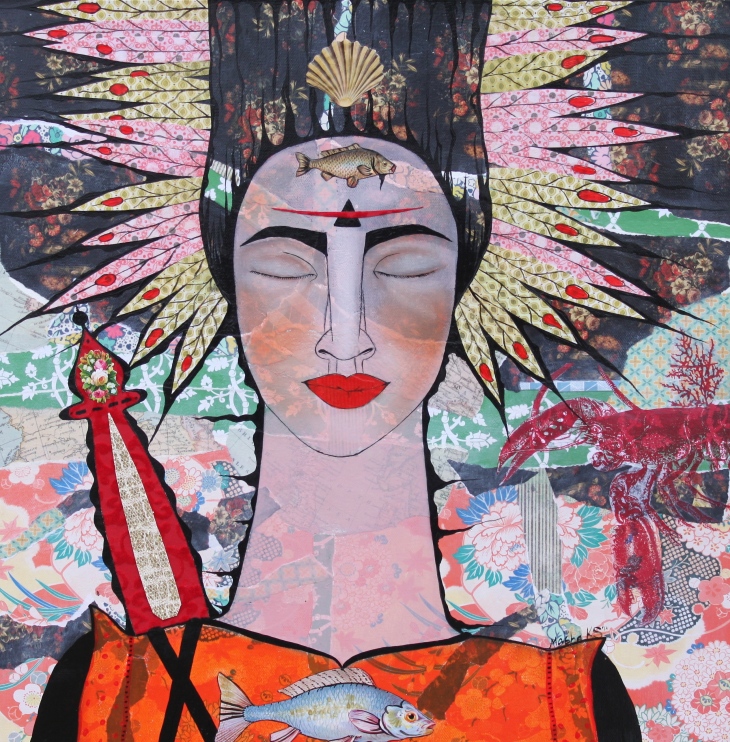 This is one of my favourite works for now. I love looking at her, and I love feeling her energy! She is Mother of Abundance and Fertility. Let her bring happiness to your life!

P.S. You can buy unframed, framed prints and prints on canvas here mashaksaundersimagekind.com 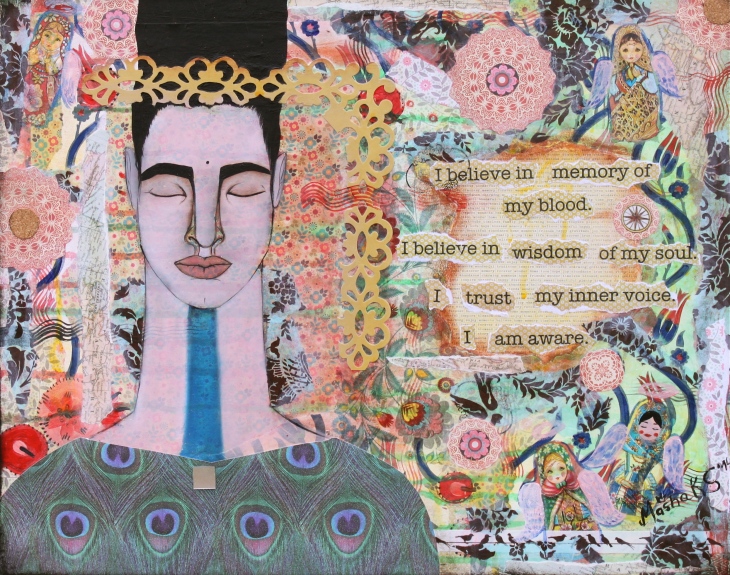 One of my latest works. Be inspired, my friends! If you want to know what helps me feel better, feel more inspired and positive today I will tell –  it’s music. Three older songs by Cat Stevens:
1. Can’t keep it in
2. If you want to sing out, sing out
3. Don’t be shy

Be sure to listen to them today, and maybe they will make your day!

P.S. You can buy unframed, framed prints and prints on canvas here mashaksaundersimagekind.com

I finished another painting/collage 🙂  The writing on it says, “We all are old souls. We remember our names. We remember who we are and why we are here. We watch life. We keep silence, but our hearts speak… We are travelers…”

So last night I started on a new project and stayed up till 4 in the morning. Today I finished it. And that’s what it looks like. Very soon my collages, paintings and prints will be available for everyone who would like to buy them 🙂

Please, listen to your intuition and love yourself. Hope you will find a cozy place for you under this sun 🙂

P.S. You can buy unframed, framed prints of my paintings and prints on canvas here mashaksaundersimagekind.com

I love, love, love beautiful things for using them every day. Like, for example, pretty notebooks for writing down my thoughts, feelings, ideas. Or for making sketches when it’s easier to express yourself by means of images instead of words. Yesterday received my order from http://www.twentyfingers.etsy.com, six wonderful handmade notebooks! And OMG! They do inspire me today! 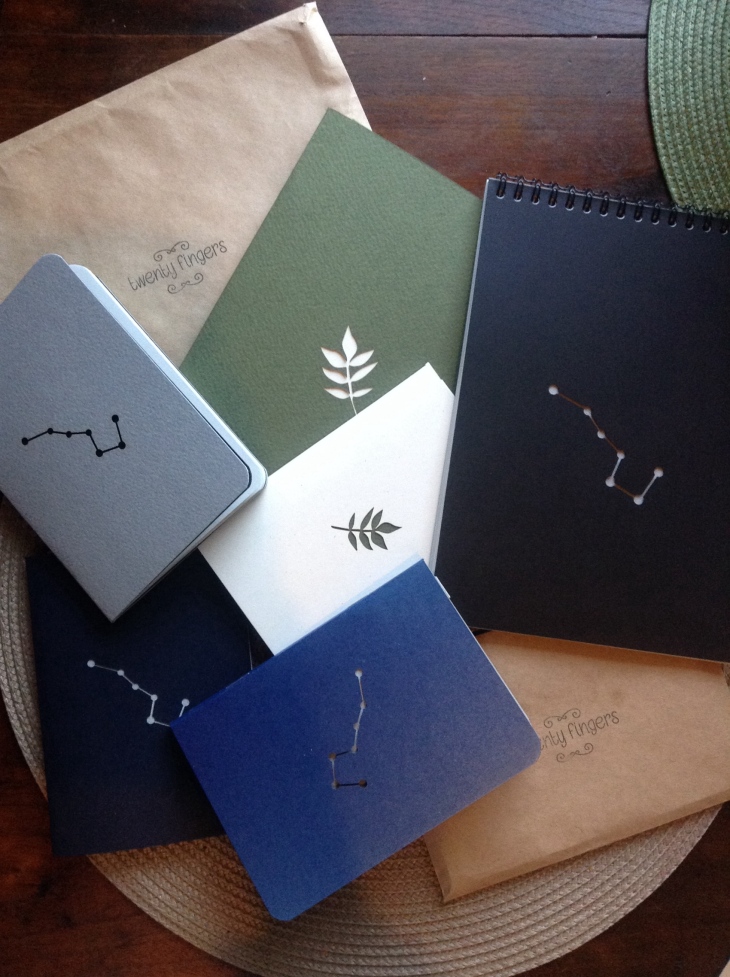 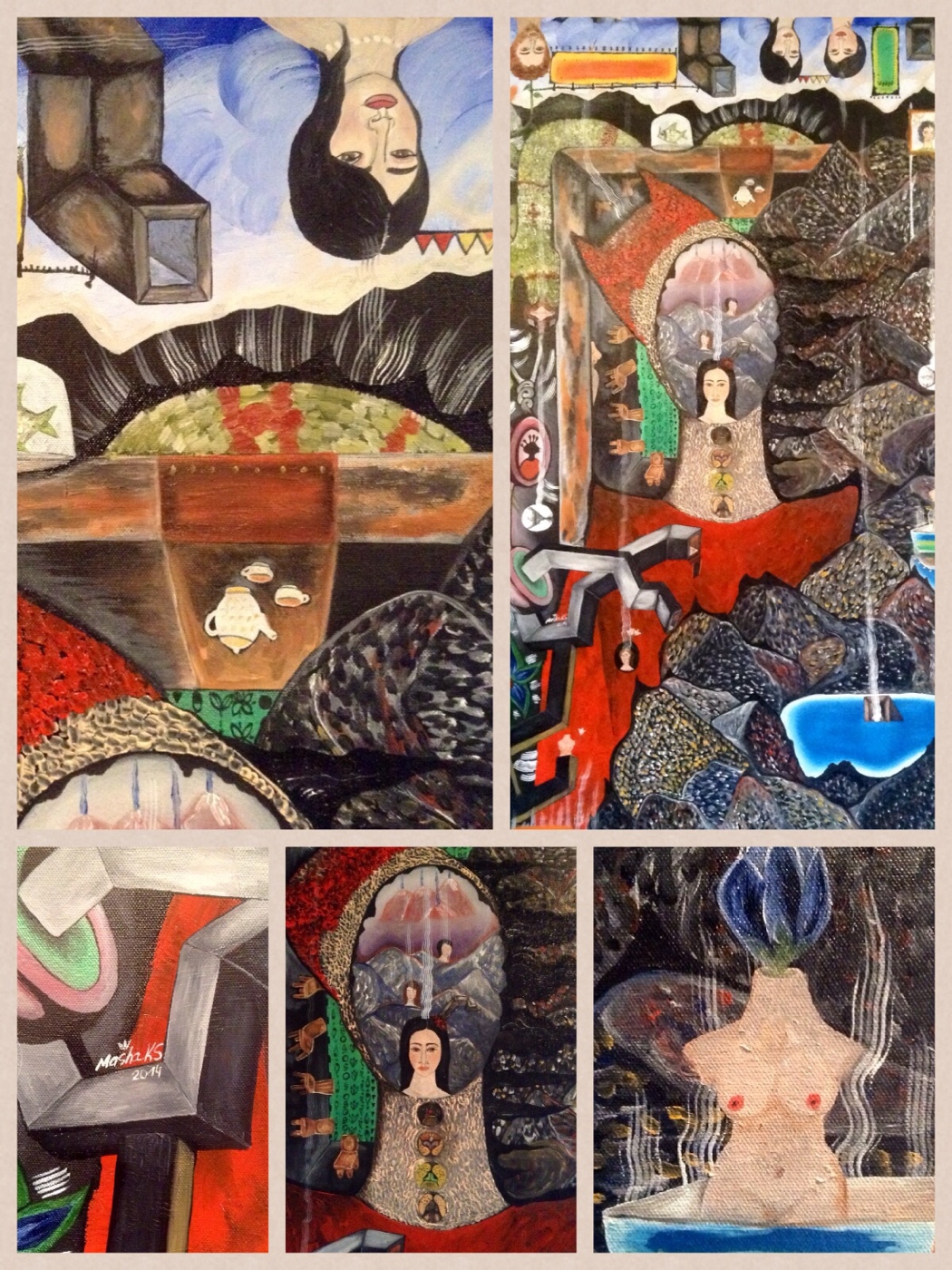 Since I moved here I haven’t been successful at making friends… That’s what I thought.

I AM successful at making truly wonderful friends. Me and my husband have a friend. He came over to spend some fun time with us a few days ago. We were sitting in the kitchen, drinking tea and silently listening to music. I am saying “silently”, for literally  none of us said anything for a while. But it was not necessary at all. None of us felt uncomfortable. And now I am telling you this, if you have someone you can simply listen to the music with and not just listen, but truly HEAR it, and you both do not need words, for you both are comfortable and enjoying this moment, so I am telling you, YOU ARE ONE LUCKY PERSON. Say “thank you” to this world for giving you a friend.

Please, be happier today, than you were yesterday 🙂

Today I read interesting story how a dog called for help of people when it realized the building next to it’s owners house was burning. And I remembered one story, that happened to me many years ago.

It was early morning and I was going to work. I had just left my house and was on my way to a bus station. I needed to climb up the stairs, I lived in mountain area. (Good everyday exercises for my body!) All of a sudden I heard a bird making very loud noices, as if trying to attract my attention. I looked at stair railings and saw tiny brown sparrow, making those noices and moving it’s wings as if it was so worried about something. So I took a few steps toward the bird, who immidiately flew up and landed in a moment further on those railings and kept being loud and worried. I took another step following the bird, and the same thing happened: it took off and landed again a little further still making that noice. It hapened again and again, untill the sparrow had suddenly quit and became really quiet. When I looked down under the stair railings when this bird stopped, I was amazed! The bird showed me a man laying on the side of the hill with his face down without any movements. It was a cold morning. I came up to him to see if he was alive, but just deathly drunk. But no. Unfortunately. His ears (as I said he was laying with his face down, so I could not see it) and hands were of a purple color. It was obvious, he had beed dead for a while. All I could do was to call police, which I did. And the bird flew away.

We hear sometimes about brave cats protecting kids from dogs. About dogs saving people. But this was something really increadible for me! The sparrow led me to show me dead body of a human! I am being absolutely honest saying how worried the bird was! 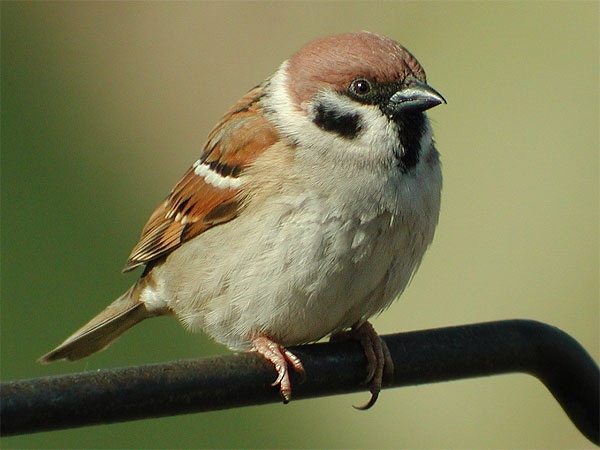 NEVER, NEVER BELIEVE ANYONE TELLING YOU, THAT YOU AREN’t ABLE TO CREATE ANYTHING! Especially if they have created nothing special in their lifes! No matter where you are right now and how hard things can be, how imperfect your skills are, NEVER ADMIT, THAT IT IS FOREVER. This world needs you as you are, PERFECTLY IMPERFECT! That is what BEAUTY IS!  YOU ARE CAPABLE OF CREATING SUCH AMAZING THINGS! If you believe them and never try, you will never know how amazing you can be! PLEASE, MY DEAREST FRIEND, CREATE. Start right here right now with what you have and go! May Universe support you in your journey!